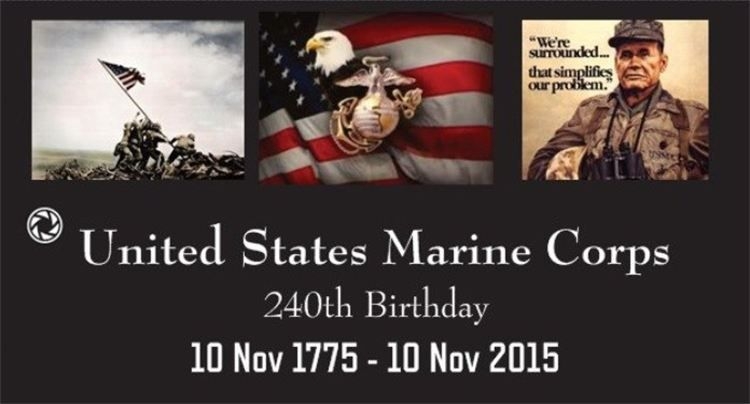 Birth of The Corps

the 240th anniversary of the inception

The official Birth of the

when the Second Continental Congress decreed:

“That two battalions of Marines be raised consisting

of one Colonel, two lieutenant-colonels,

two majors and other officers,

as usual in other regiments;

that they consist of an equal number of privates as with other battalions,

that particular care be taken that no persons

be appointed to offices,

or enlisted into said battalions,

but such as are good seamen,

or so acquainted with maritime affairs as to be able

to serve for and during the present war

with Great Britain and the Colonies;

unless dismissed by Congress;

and that they be distinguished by the names of

the First and Second Battalions of Marines.”

is regarded as the birthplace of the Corps as the

location of the first Marines to enlist under

Though it is disputed if a recruiting drive may have occurred earlier at Nicholas's family tavern,

When the Revolutionary War ended in 1783,

the Continental Navy was disestablished,

and with it, the Continental Marines.

"act for establishing and organizing a Marine Corps"

was signed by President John Adams.

Marines celebrated the re-creation of the Corps

with little pomp or pageantry.

sent a memorandum to CommandantJohn A. Lejeune, suggesting the Marines’ original birthday of

be declared a Marine Corps holiday to be

celebrated throughout the Corps.

Lejeune so ordered this in Marine Corps Order 47;

The first formal ball was celebrated in 1925,

though no records exist that indicate the proceedings

of that particular event.

though some accounts include mock battles,

The celebrations were formalized and standardized

which would enter the Marine Drill Manual in 1956.

their knowledge to the new generation of Marines.

The celebration also includes a reading

as well as a message from the current Commandant,

and often includes a banquet and dancing,

the birthday celebration will also include a pageant

as a reminder of the history of the Corps.

Another modern tradition includes a unit run on the 10th.

Marines are reputed to celebrate the birthday,

regardless of where they may be in the world,

even in austere environments or combat.

In a more somber tradition,

Samuel Nicholas's grave in the

in Philadelphia is marked with a wreath at dawn

by a group of Marines annually on 10 November

to celebrate his role in the founding of the Corps.

Almost every 'major city' in the United States has

with the traditions of the Marine Corps Manual,

within a day or two of the actual date set forth

*the above info is from Wikipedia, the free encyclopedia...

The "Marines' Hymn" is the official hymn of the United States Marine Corps. It is the oldest official song in the United States Armed Forces.[1] The "Marines' Hymn" is typically sung at the position of attention as a gesture of respect. However, the third verse is also used as a toast during formal events, such as the birthday ball and other ceremonies.

your Corps, my Corps, our Corps... ...gahollywoodkiss.com