a brief history of

to billions around the globe... 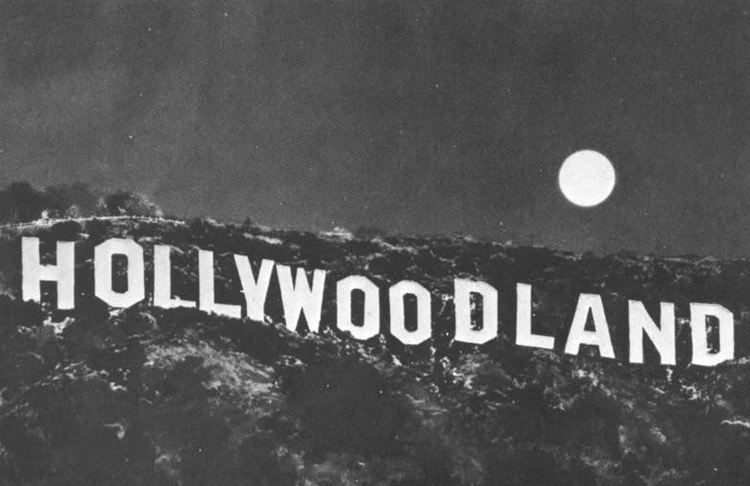 a world famous landmark in the Hollywood Hills area of 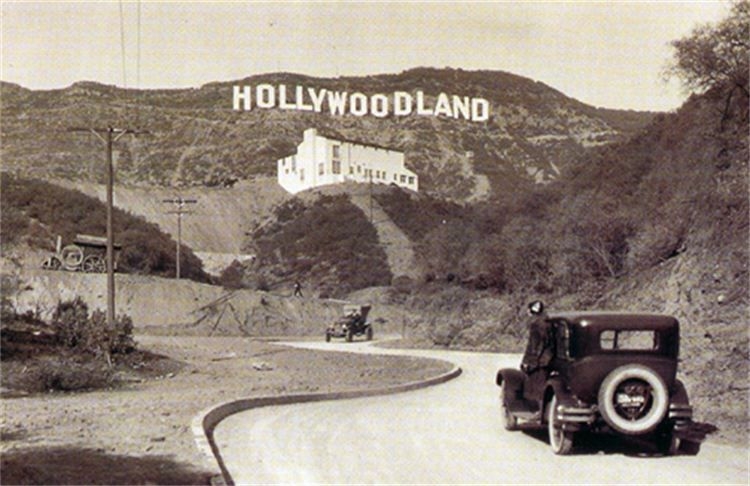 The Sign was created/designed by Thomas Fisk Goff in 1923 owner of the Crescent Sign Company, (at a cost of $21,000.00) contracted by Sydney Woodruff and Tracy E. Shoultz of the 'HOLLYWOODLAND Real Estate Group'. Each letter of the Sign was 50 feet high and 30 feet wide, with all 13 letters having approximately 4000 light bulbs studded into them.

*a nearby cabin housed a maintenance man whose only responsibility

was to change the bulbs.

The sole purpose of the Sign at the time of its inception was strictly for the advertisement of available properties in the HOLLYWOODLAND development: 'a superb environment without excessive cost on the Hollywood side of the hills'.

The Sign was officially dedicated on Monday, 13 July 1923, and was originally perceived to last only a year or two. But after the rise of the American cinema business in the Los Angeles area, the Sign became an international recognized symbol, and was left in tact. 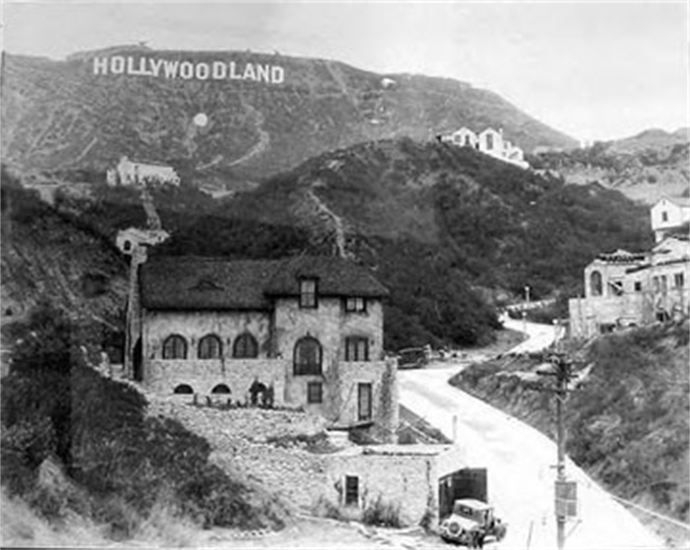 As with any famous natural monument or man-made structure that brings the desired visitor and/or tourist, it sometimes is associated with an unforseen tragedy.

On Sunday, 18 September 1932 the HOLLYWOODLAND Sign was the scene of a young womans dreams being forever silenced; Ms. Peg Entwistle, 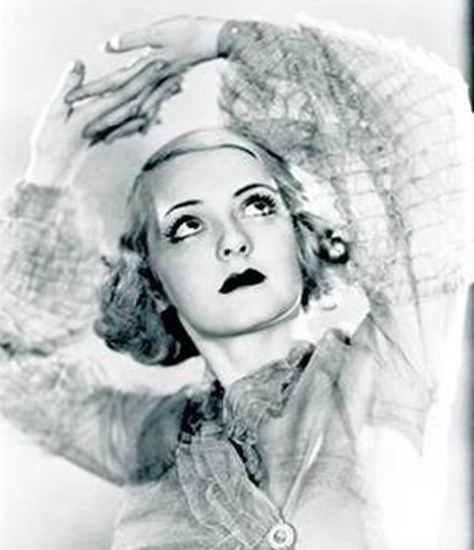 at the young age of 24; was so distraught at the lack of offers associated with the silver screen, she climbed a maintenance workers ladder to the top of the letter ''H', and jumped into the ravine below killing herself instantly.

And although Ms. Entwistle had an above average career on Broadway; she will forever be known as

"I am afraid, I am a coward. I am sorry for everything.

If I had done this a long time ago,

it would have saved a lot of pain. P.E." 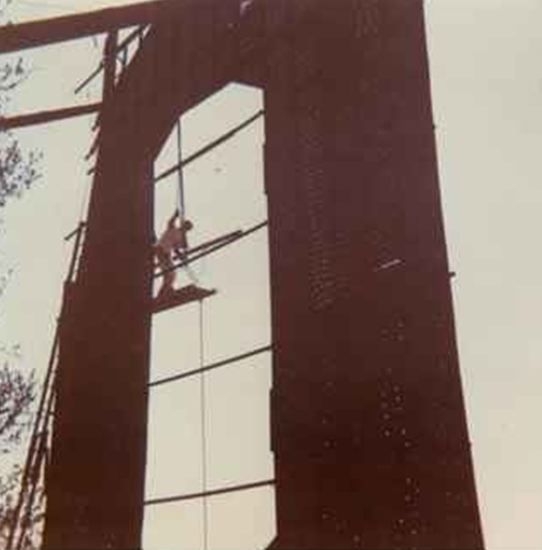 The Sign itself has endured many years of weather-wear,

the total destruction of the letter 'H' in the early 1940's by it's official caretaker driving inebriated, an untold number of nearby earthquakes, and numerous

close calls by nearby brush fires.

In 1949, the Hollywood Chamber of Commerce began a contract with the city of Los Angeles Parks Department to repair and build the Sign. The contract stipulated that 'LAND' be removed to spell 'HOLLYWOOD' and reflect the district, not the HOLLYWOODLAND housing development.

The H.C.C. also decided 'not' to foot the bill any longer for the cost of the Sign illumination, so the Chamber opted not to replace the bulbs.

The 1949 refurbrishment gave the Sign new life, but the unprotected wood and sheet metal structure was continuing to deteriorate throughout the years.

Eventually causing the first 'O' to splinter and break, having it resemble a lowercase 'u', and the third 'O' fell down completely, leaving the severely dilapidated sign displaying 'HuLLYWO D' 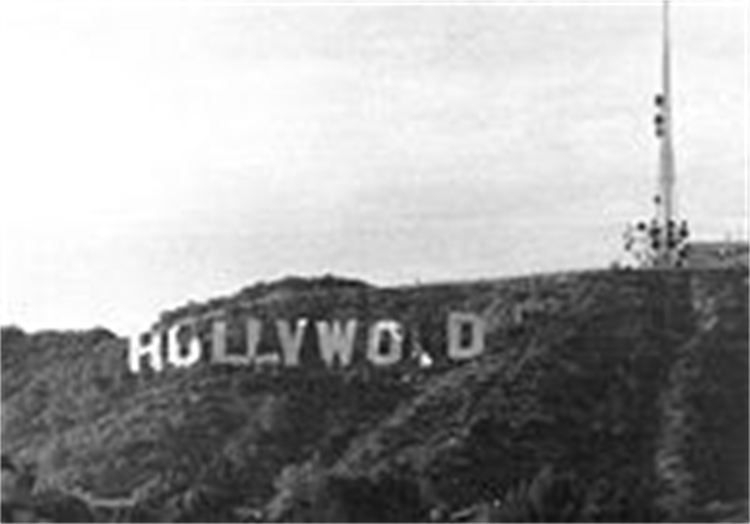 In 1978, in large part because of a public campaign to restore the landmark by 'the shock-rock-god' Alice Cooper

(who in fact donated the missing 'O'),

the Chamber set out to replace the intensely deteriorated Sign with a more permanent structure.

to sponser replacement letters made of steel, which guaranteed the survival of the Sign for many years to come. The new letters are now 45 feet tall and range from 31 to 39 feet wide. The new version of the sign was unveiled on Hollywood's 75th anniversary, 14 Novenber 1978, before a live television audience of over 60 million people.

In 2005, the original 1923 Sign was auctioned on eBay and purchased by artist Bill Mack for an undisclosed amount.

Donors of the 1978 public campaign to restore

publisher of the Hollywood Independent Newspaper

founder of the Kelley Blue Book

the founder of Playboy Enterprises, Inc.

(donation was made in the memory of comedian Groucho Marx) 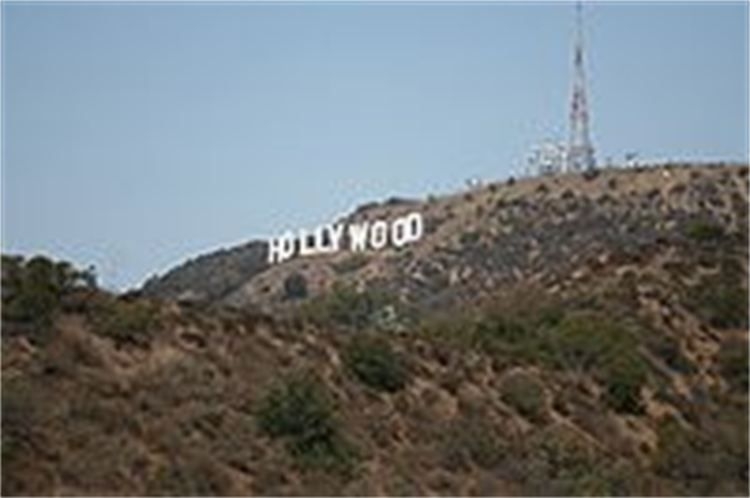 The land in the vicinity of the Sign remains privately owned. Much of the surrounding area was owned by the estate of Howard Hughes, who had once planned a hilltop mansion at Cahuenga Park; part of that tract was sold in 2002 to a private investment firm. Because of the possibility of the new owners building structures along the ridgeline, the City of Los Angeles considered buying the property, possibly by raising money from celebrities, as was done for the 1978 restoration.

Environmentalists and preservationists were also concerned about the possible real estate devolopment in the area. On 11 February 2010, as part of a campaign to raise money to buy and protect the 138 acres next to the sign,

The Trust for Public Land, with the blessing of both the City and the HOLLYWOOD Sign Trust, covered the sign with a large banner reading: 'SAVE THE PEAK'.

By April 26, 2010, The Trust for Public Land announced it had raised enough money, with Playboy magazine founder Hugh Hefner stepping forward (once again, Hef is the man) to donate the final $900,000.00 toward the total of $12.5 million requested by the new owners.

It is illegal to make unauthorized physical alterations to the Sign. Although in the past, the City had occasionally allowed modifications for commercial purposes, the current policy no longer allows such changes to be made. Because the Sign has had numerous 'unofficial' alterations during its existence; in 2000, the Los Angeles Police Department installed a state-of-the-art security system featuring motion detectors, cctv cameras, and other deterrents. Any movement in the clearly marked 'restricted areas' triggers multiple alarms and notifies the Police Department. 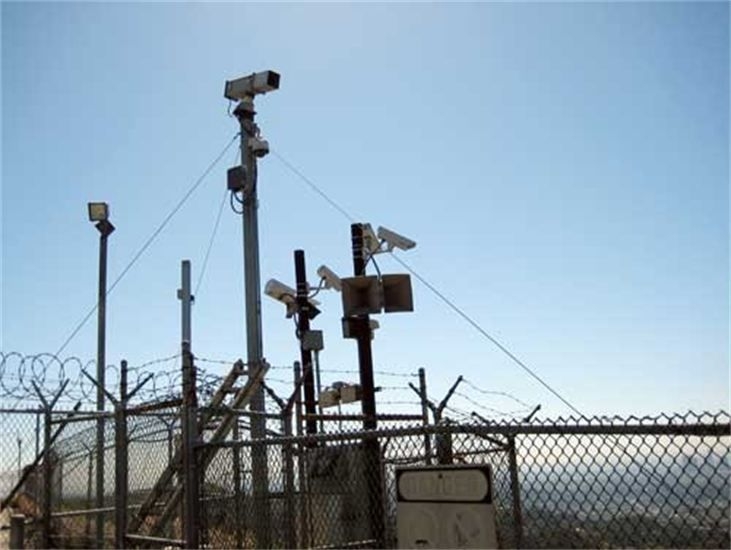 There are even cameras and motion sensors attached to the Sign structure itself: 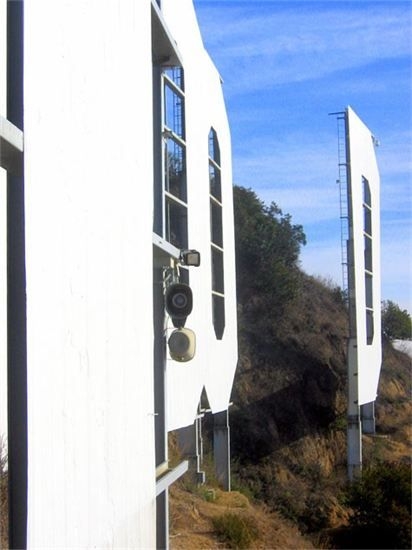 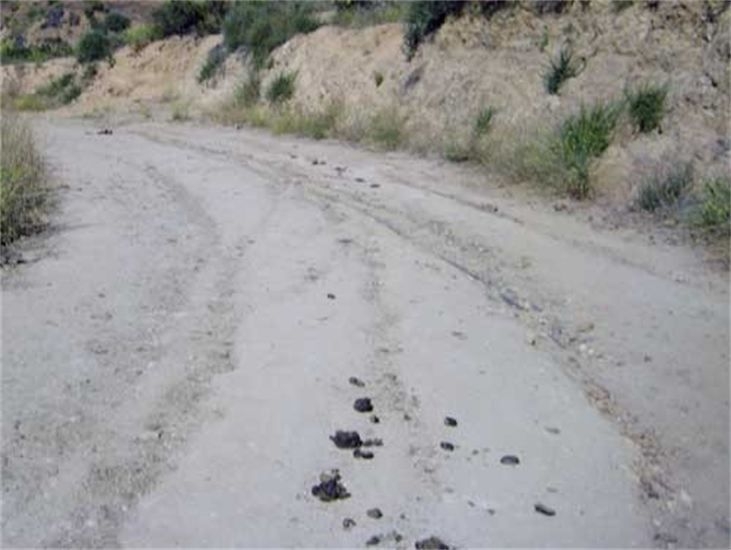 The easiest way to get up close and personal with the Hollywood Sign is to take the 5-6.5 mile hike on Mt. Lee starting/ending in Griffith Park.

The trail is dog-friendly and is in use 365 days a year.

There are hazards to be considered:

this is non-developed area;

rattlesnakes have been encountered,

all0w 3-4hrs for the completed activity,

which is fenced off.

There are plenty of areas to picnic and to take pictures. 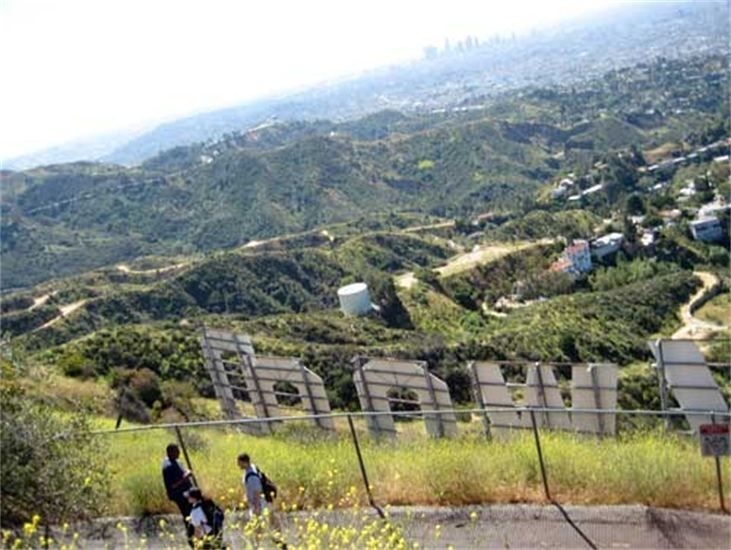 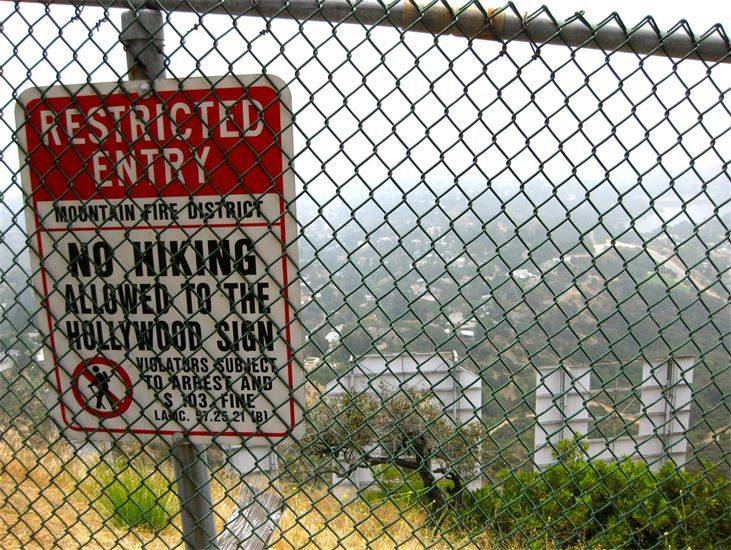 Now once you 'make it' to the icon known as the HOLLYWOOD Sign,

don't be tempted to alter it as these individuals have: 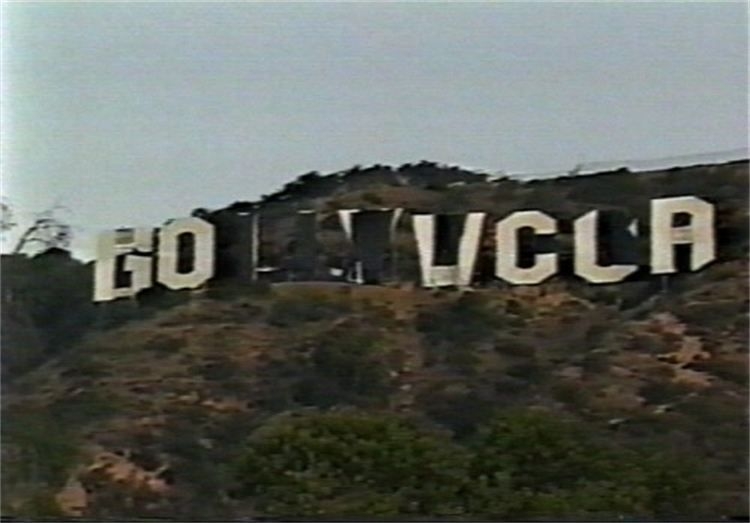 The following is a listing of the more famous/infamous modifications:

*following the passage of a state law decriminalizing marijuana

*for Easter sunrise service, being held at the Hollywood Bowl

*a banner, promo for the newborn network

*during the Iran-Contra hearings

*a banner, for the Gulf War

*for the annual USC-UCLA football game

twenty members of UCLA's Therta Chi's frat house were responsible for this prank and were charged w/trespassing. This incident is what prompted the 1994 instalation of a $100,000. security system.

*on Hollywood's centennial; a prank by CalTech's seniors

*done by the pop star Kesha

*by The Trust for Public Land; to cease the real estate devolopment around the Hollywood Sign by a greedy land owner.

"I use to think as I looked at the Hollywood Sign,

There must be thousands of girls sitting alone like me dreaming of becoming a movie star.

But I'm not going to worry about them. 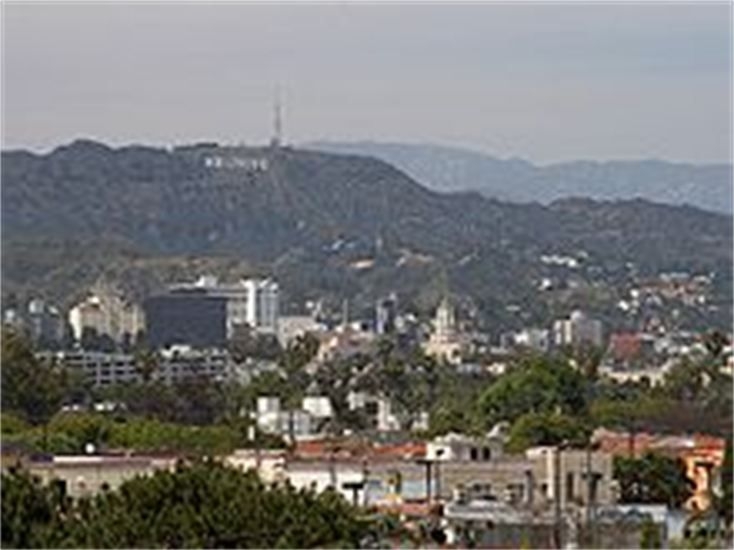 is currently 'watched over' by

a California 501(c)3, a non-profit organization.

The purpose of the Trust is to physically maintain, repair, and secure the HOLLYWOOD Sign; to educate the world about its historical and cultural importance; and to raise the funds necessary to accomplish these projects.

By protecting and preserving this towering treasure that is the Sign, the Trust helps strengthen its symbolic role as the beacon of the entertainment industry.

and is the icon of the entertainment industry

and the face of the LA lifestyle" 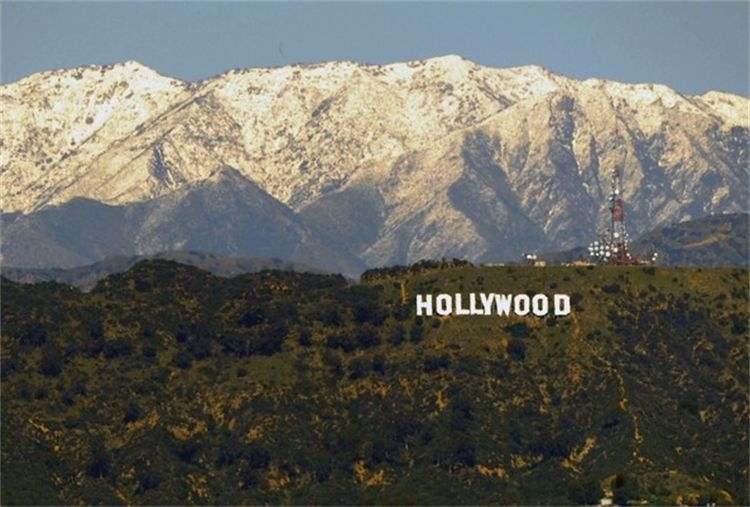 Pits Wealthy Residents Against Urinating Tourists: "One of These Days Someone Will Get Shot" 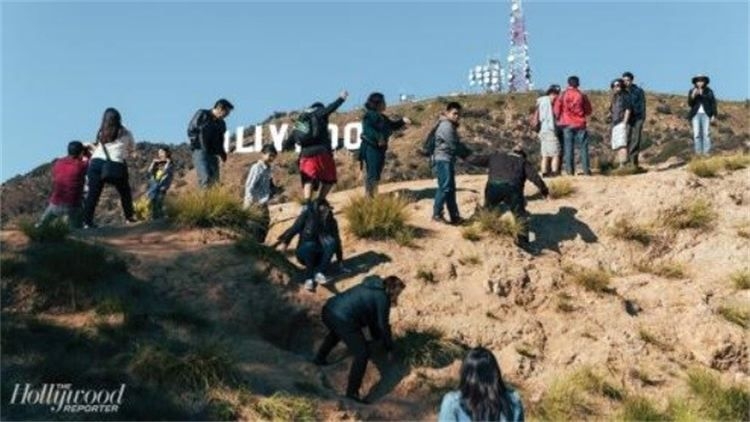 "It’s a disaster waiting to happen,"

once owned by folk-rock band The Association

is the residence physically closest to the city’s most enduring icon.

So he often deals with Darwin Award nominees who trespass the sign.

“It’s late at night, they fall down,

knock on your door and go, ‘I’m bleeding. Can I use your phone?’

It’s more drama than you want when you’re leading a peaceful life.”

You need Flash Player in order to view this.

a 'time lapse video' of Tinseltown's biggest star... thanks to Sherwin-Williams and The Hollywood Sign Trust.

**Disclaimer by Mr. G. A. Kiss/GAHOLLYWOODKISS.com :

I 'do not' claim ownership of any of these images

displayed on this page,

the information given on this page was attained from

If any of this information is otherwise incorrect,

I will revise it upon notification by a known author

who can sustain authorship.

***Copyright protection laws were not violated at any time

during the construction of this web page. 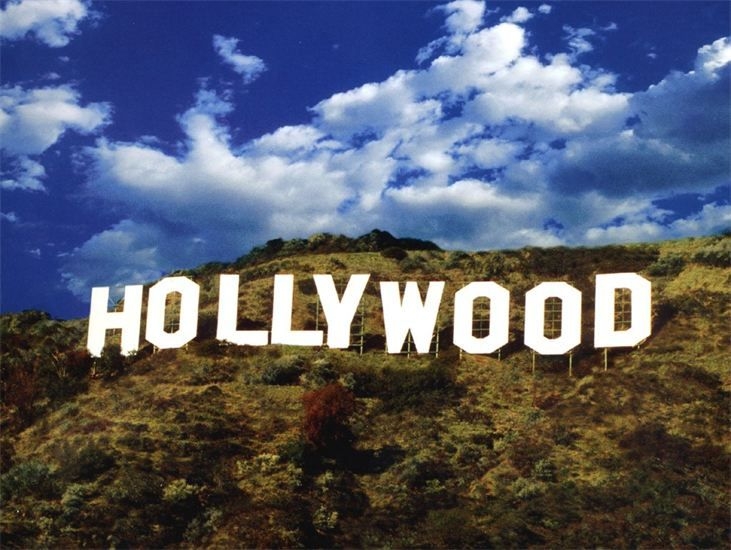